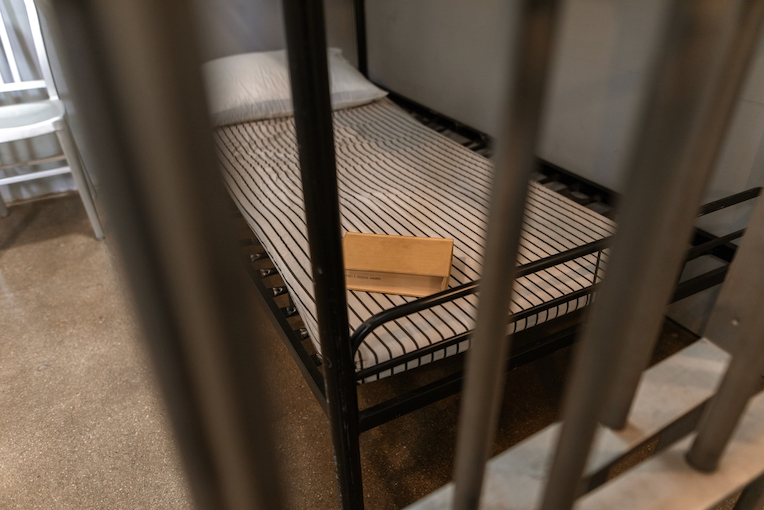 The recent decision taken in California to place men and women in the same wings of prisons as a response to the violence meted out to trans prisoners is a nascent issue in Colombia, but sooner or later it will get here. So it is incumbent upon us to analyse it in time.

The prison situation in the US is unique in the world and the statistics on violence, rape and also the number of prisoners is incomparable with any other part of the world. However, as various collectives take advantage of the dramatic situation in the US and extrapolate it to their own country with the aim of demanding changes in prison policy, we have to look at the reality of that country. First we should ask ourselves about the decision to locate men who identify as women (hereinafter trans) in the same wings as women. This decision was taken due to the supposed violence against this collective and their vulnerability in prison. But who are the vulnerable prisoners in the context of the US? Almost all of them: youths, ethnic and sexual minorities and those of certain social classes. So when we talk of trans, why are they vulnerable? Who are their victimisers and in what context?

The main argument is that this collective is at risk from violence in the prisons, including sexual violence and therefore should be transferred from men’s prisons or wings to women’s prisons or wings in concordance with their gender. There is a lot of debate in certain woke circles about whether trans are women or not. I cannot accept that they are women, but this debate is dealt with in thousands of feminist texts and I have no intention of repeating the arguments here, I will rather deal with the issue of women and trans in prison and the violence, including sexual violence in US prisons.

So, above all we should be clear that despite the comments of trans activists US prisons are extremely violent places for all prisoners, blacks, whites, Latinos, gays, lesbians, the poor and also for trans. When we look at the problems associated with violence such as that exercised by the prison institution as such, that exercised by functionaries in fulfilment or abuse of their authority and that exercised by others prisoners, prison is not a paradise for anyone.

First, we should remember that the US has the largest prison population in the world. Just in the federal and state level prisons there were 1,430,805 prisoners in 2019 and 92.5% were men.1 California has one of the highest rates of imprisonment in the country with 8.6% of all prisoners in federal and state level prisons. It is worth pointing out that these figures exclude prisoners held in institutions under the control of counties, those that are on parole and those under other the control of other mechanisms. Like Colombia many prisoners are serving sentences for violent crimes. In state level prisons 14.6% of the men are held for intentional murder and 14.1% for rape or sexual assault compared to 12% and 2.5% of women for the same crimes. There is huge gap regarding women and their rate of involvement in sex crimes compared to men and if we take into account that women barely represent 7.75% of the prison population, in numerical terms the gap seems even wider still. In fact, it is only regarding crimes of poverty where a greater number of women participating can be seen; 24.4% of female prisoners committed crimes against property compared to 15.6% of men and also 25.7% of them are in prison for drug related crimes compared to 13.4% of the men.2

However, there are those who propose transferring men to women’s prisons in California, without taking into account that men’s prisons are not only more violent places than women’s prisons but that the percentage of violent prisoners is greater amongst the male inmate population. So it is worth looking at the statistics on prison violence, against whom it is committed and what type of violence is meted out to the victims.

Despite the violent nature of North American prisons, the majority of deaths are caused by another type of violence, institutional and class based violence. Between 2001 and 2016, a total of 59,036 deaths took place in federal and state level prisons (90% of them in state level prisons) and just 8 states represent more than half of those deaths and two states, California and Texas account for 23% of the total.3 Of all the deaths 89.5% were due to illnesses, mainly cancer and coronary illnesses. Homicides accounted for 1.4%, or 1,184 people.4 Homicides account for 2.3% of deaths in local jails and 51.1% due to illnesses. The big difference between these institutions and federal and state level prisons is regarding suicide with 30.7% of prisoners dying from suicide.5

But the basis of the arguments for transferring trans to women’s wings is the supposed danger of physical violence and above all sexual violence towards the trans. It is presumed that they are at greater risk than the rest of the prison population. However, it is not quite as trans activists paint it as they ignore the the general vulnerability inmates face and that of other numerically greater collectives who don’t have the support of the Wokerati of Hollywood, the pharmaceutical industry amongst others, i.e. other collectives who are not in vogue.

The US Department of Justice investigated the conditions reigning in the prisons of the state of Alabama. They interviewed 55 officers, 270 prisoners, they received 400 letters, and carried out 500 telephone interviews with prisoners and their families, as well as examining official documents and archives. At that time the Alabama Department of Corrections (ADOC) held 16,000 prisoners spread out through 13 prisons of varying levels and categories. They concluded there was excessive violence, sexual abuse and violent deaths in the said institutions.

One of the problems they identified was overcrowding, as it had an overcrowding rate of 165% and it is worth bearing in mind that California also has a serious problem of the same nature. Overcrowding goes hand in hand with another problem, which is notn just common in the country’s prisons system but is to be found in many places, including Colombia and it is the number of guards per prisoner. The ADOC itself accepts that it was lacking 2,000 guards and 125 supervisors to cover the needs of the system. The report also pointed to a recurring problem in almost the entire world and it is that prison officers do not take sufficient precautions to avoid violence amongst prisoners and this even happened when the prisoners had informed the authorities of the danger they faced or the threats made against them. Moreover, some of them suffered violent attacks at the hands of other prisoners who already had a long record of attacks on other prisoners.

They also found that the authorities did not properly separate the prisoners and mixed predators with possible victims and were very ineffective in preventing prisoners passing into areas they were not authorised to be in. They found that in 2017 there were 1,100 incidents of this nature and there is no proper filtering of potentially violent or sexually abusive prisoners nor of vulnerable prisoners.

They also found and reviewed 600 cases of sex abuse amongst prisoners and pointed out that many cases are not reported to the authorities for many reasons, amongst them a lack of trust in the effectiveness of reporting them. One of the reasons may be that the guards are also involved in many cases of this nature. According to the NGO RAINN (Rape, Abuse Incest, National Network) there around 80,600 cases of sexual violence per year in the US prisons and in 60% of the cases the victimisers were prison functionaries. The authorities prohibit any sexual contact between prisoners and yet, they differentiate between what they call non consensual and consensual contact. Given the power dynamics at play between a functionary and a prisoner, it is hugely problematic to talk of consensual sexual relations, but even so, they acknowledge that more than 50% of such cases are, according to their own criteria, non consensual.6In the case of Alabama they made a series of recommendations regarding overcrowding, contraband, sexual violence and on this last point they recommended changes to the internal regime in the prisons including the reclassification of all prisoners according to criteria of sexual security and the separation of (potential) predators from their possible victims. This is something that California should also do, instead of mixing them all in the same wing.

Men account for the greater percentage of prisoners and also the greatest number of victims and victimisers of sexual violence. This can also be seen in the case of youths held in various institutions of the country. According to a study by the US Department of Justice, 7.1% of youths reported sexual abuse, the majority at the hands of functionaries. Whilst a greater percentage of the trans population reported sexual abuse than the non trans population, we should bear in mind the relative weight of this cohort and that the percentages may appear dramatic. Their low relative weight within the overall inmate population presents an image that is not entirely accurate when looked at in percentage terms, a trick trans activists use a lot. Although it is worth pointing out that in percentage terms they run a greater risk at the hands of functionaries than other detained youths. The same report acknowledges that prisoners suffering from mental health problems are at greater risk than those who do not have such problems, they are 2.6 times more likely to be victims of abuse amongst youths where force or coercion was used and 1.5 times more likely in the case of abuse at the hands of functionaries. Those who suffer from some physical disability are more than twice as likely to be victims of abuse by other youths and 1.5 times more likely at the hands of functionaries. Neither is it surprising that a greater number of male youths reported abuse by functionaries: 6.1% compared to 2.9% female youths. But the female youths are more vulnerable to abuse by other females held at the same institution: 4.7% of them compared to 1.6% of males abused by other males.7

There are serious problems within the judicial and prison system of the US, many of these problems are related to overcrowding, deficiencies in the preventative systems and also to the functionaries. To demand that men be transferred to the women’s wings does not resolve any of those multiple structural problems of the system, but rather it exacerbates them. The trans are not the most vulnerable collective, not by a long shot, and there is the problem not acknowledged by the authorities that some predators self identify as women, i.e. trans with the aim of being transferred to women’s wings, as has happened in other parts of the world where trans prisoners have raped women.8 Even in Texas female prisoners have reported sexual harassment by trans prisoners in the showers and toilets.9

The only solution to the problem is to acknowledge that prisons don’t work, they don’t meet their supposed aims, that violence is rampant in the institutions and any denial of this as a general and not a particular rule not only violates the rights of women and exposes them to even greater levels of violence, but also postpones any attempt at resolving the institutional and structural problems to a far flung future when all prisoners are as fashionable as the trans are nowadays.

About the author: Gearóid Ó Loingsigh is a political and human rights activist in Latin America and has published a number of reports on prisons in Colombia. Prior to the Covid-19 pandemic he regularly visited prisons in Bogotá, Medellín, Cúcuta, Bucaramanga and Valledupar to carry out workshops with prisoners. Gearóidhas given talks to and workshops with grassroots rural and student based organisations on prison issues and also conflict and development.