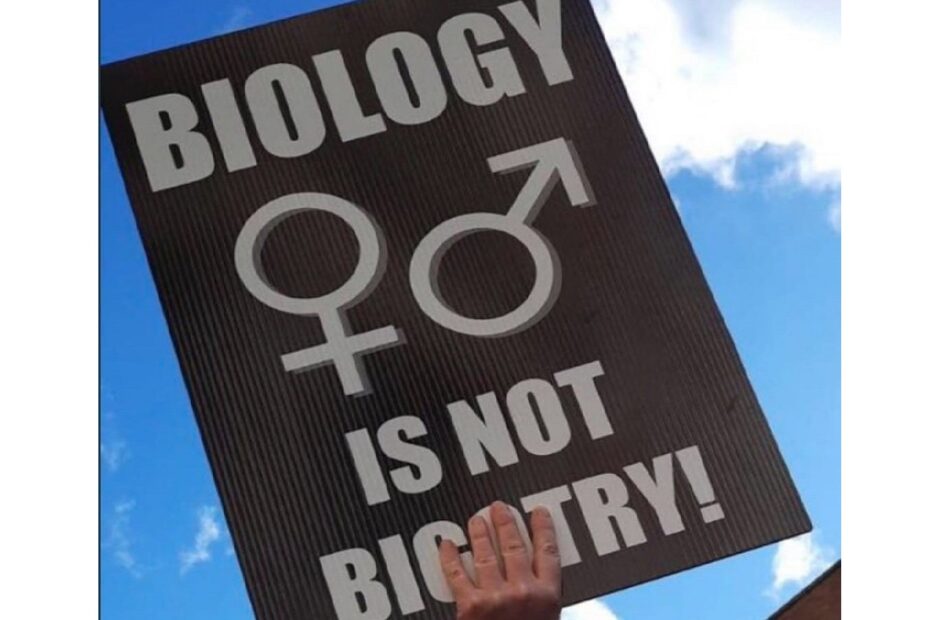 A rally entitled “No woman left behind” was held by the National Women’s Council on Saturday 5th March 2022 as part of International Women’s Day. The crowd gathered at Leinster House to listen to the speakers.

A Countess staff volunteer attended the meeting and peacefully held up a sign with the message  “Woman= Adult Human Female” on one side, and “Biology is not Bigotry” on the reverse.

This lone woman was then surrounded by males chanting, “transwomen are women”. Some demanded she take down her “transphobic” sign.

One of the stewards then approached her, not to come to her assistance as might be expected, but to accuse her of “causing a disturbance”. She was then asked to leave by the steward, but refused and stood her ground.

Members of the NWCI stood idly by as this woman was “left behind” and was eventually forced, through intimidation, to leave the rally.

Official feminist organisations in receipt of state funding, have failed in their duty to protect women’s rights and to inform women of the consequences of the Gender Recognition Act, which was enacted through stealth in 2015.

The NWCI has welcomed a trans identified male onto its board, replacing a woman, and did nothing when the HSE removed the word woman from cervical screening information and replaced it with “people with a cervix”, or when trans identified males were placed in Limerick women’s prison.

Two months after our launch, in November 2020 the NWCI signed a letter from the Transgender Equality Network Ireland (TENI), calling for “the removal of legitimate political representation” from Irish gender critical groups, whom the letter branded as “right wing hate groups”.  We responded with an online campaign called #WeWillBeHeard which went viral on social media and trended globally. Undeterred, we have continued to advocate for women and girls.

On a day when the NWCI were celebrating “no woman left behind,” a woman attempting to have her voice heard, was silenced and ostracised.

Here is her tense and beautifully written account of events at the rally as they unfolded on that day.

Saturday. I had my sign ready in an IKEA bag.  It was sitting by the front door since the night before.  I tripped over it and thought ‘that’s a sign’ no pun intended.  I had it printed the day before.  I told the printer if he felt uncomfortable printing it, I wouldn’t hold it against him for refusing the job.  He said he’d do it for €50 cash.  The sign was a black and white, double sided, A2 corriboard poster that read Woman = Adult Human Female on one side and Biology is Not Bigotry on the other. Today I was going to town to attend the NWCI rally to Leave No Woman Behind.

I travelled to town on the train alone.  I walked towards the march assembly point and put on my face mask, sunglasses and pulled down my peaked cap.  This is what women who state that sex is real do now.  They disguise themselves so they can’t be identified, not because we are acting in bad faith but because we don’t want to lose our jobs.

I got to the march. There weren’t as many people there as I expected, and I thought I had gotten the time wrong and maybe it was due to start later.  I walked through the crowd and looked at the signs people had.  I was looking for a safe place to stand.  I walked to Dawson Street and turned around.  I was going to go home.  I couldn’t do this on my own.  I walked into a café to get a coffee and then heard the first speaker.  I wasn’t early.  It was starting.  I left the café and walked back towards the rally.  I saw a journalist I recognised standing on the steps of a building near the stage. I decided that if I stood near her, I would be safe.  I still believe in the power of the press to protect freedom of expression.

I looked into my bag.  I felt like I did once before I jumped off a jetty into the Irish sea on Christmas Day, terrified but determined.  I took the sign out and held it above my head.  Then nothing happened.  I just stood.  One minute, two minutes, nothing.  I thought ‘I’m going to be ok’.  I don’t know if this is imagined or real, but I thought I saw Orla O’Connor and Mary Lou McDonald do a double take when they saw the sign.  I had turned the Woman = Adult Human Female side of it towards the stage.

I noticed a woman walking towards me.  She glanced up at the poster and I saw some expression cross her face.  I couldn’t read it.  As she passed, she said ‘nice sign’ or something to that effect.  Her friend who was close behind her passed me a flyer.  I glanced at it quickly and saw the hashtag #AllWomenLeftBehind.  I shoved it into my pocket.

Within a few minutes these women were back.  We talked very briefly.  They said they wanted to stand with me and did I need them to do anything.  I said I needed to get into the middle of the crowd so as many people could see the sign as possible.  If they stood with me, I would go.   I put the sign back in my bag and walked along the footpath looking for a place to stand and then I saw it, a hand painted portrait of Countess Markievicz.  I am not religious.  I don’t read horoscopes or believe in angels.  But I do believe in bravery.  I would stand next to the Countess. I turned to the stage and took out the sign.  I planted my feet and raised it over my head.  Woman = Adult Human Female/Biology is Not Bigotry.  The women, my new companions, true their word, quite literally, had my back.  We waited one minute, two minutes, three minutes, four minutes, then it happened.  The violent hiss in my ear.

‘You should be ashamed of yourself, that sign has no place here.  Take it down’. The person saying these words was a beautiful, young girl.  Probably 20 years old.  I felt very sad in that moment.  One of my bodyguards said ‘What’s wrong with the sign? It’s the dictionary definition of the word woman’.  What followed probably lasted no more than five minutes.  It felt like a long time and no time at all.  We were berated, shouted at, called terfs, transphobes, bigots.  The usual litany of insults that has taken the place of reasoned debate.  I was surrounded by mostly young men who stood in front of and behind me blocking my sign with their own.  When I moved left or right, they moved too.  It was a grotesque waltz. Then something remarkable happened.  The NWCI chief steward arrived and said I was causing a disturbance.  She wanted to talk to me at the edge of the crowd.  I politely told her no.  I was going nowhere.  I was not the cause of the disturbance I was just holding a sign above my head that declared the dictionary definition of a woman.  I felt a little sorry for her.  She seemed genuinely unsure what to do with a woman who said no.  She left and a Traveller woman standing next to me asked me why I had to take down my sign.  I told her they objected to the message.  She looked it and said, ‘but that’s right’.  We didn’t last much longer.  The group around us started to chant ‘Transwomen are Women’, ‘Trans Rights Are Human Rights’.  They drowned out the sound of the woman who was speaking on stage.

I didn’t want to go.  I felt an infinitesimal prick of humiliation.  They were running me off, a woman, at a women’s rally, holding up a sign bearing the dictionary definition of the word woman.  But I had done what I came to do.

The women who protected me said they would wait for me around the corner on Kildare Street.  As I walked out of the crowd a young man stuck his long lens camera in my face and took many photos.  I gave him a starlet wiggle of my fingers and kept walking.  I was followed to the exit by a different NWCI steward.  I turned to her and waved.  I wasn’t being sarcastic.  I was smiling under the mask.

I turned the corner and saw my brave accomplices.  They had multiplied to four.  We were there independently.  We had never met prior to that day. They were very concerned for my welfare.  But I was fine.  Strangely calm.  We talked briefly and I was anxious to leave to get home.  I will be forever grateful to those four women.  You know who you are.  Thank you.

The face of the beautiful young woman who started the abuse keeps coming back to me.  Her image is contorted with a near religious zeal.  I wonder if she understands that Irish women were told for decades that they had to be ashamed.  Ashamed of having babies that were the product of sexual desire or the product of rape. Ashamed of their bodies and any inclination to put themselves and their needs before the needs of others.  Shame.  Shame.  What is shameful is that Irish women were never consulted when the legal definition of woman was expanded to allow men to declare themselves to be women. Irish women should not be ashamed or afraid to say what we are – Adult Human Females.

Tags:languageNWCIwomen
previousA view from outside the Western bubble
nextCensus Campaign
JOIN US
DONATE