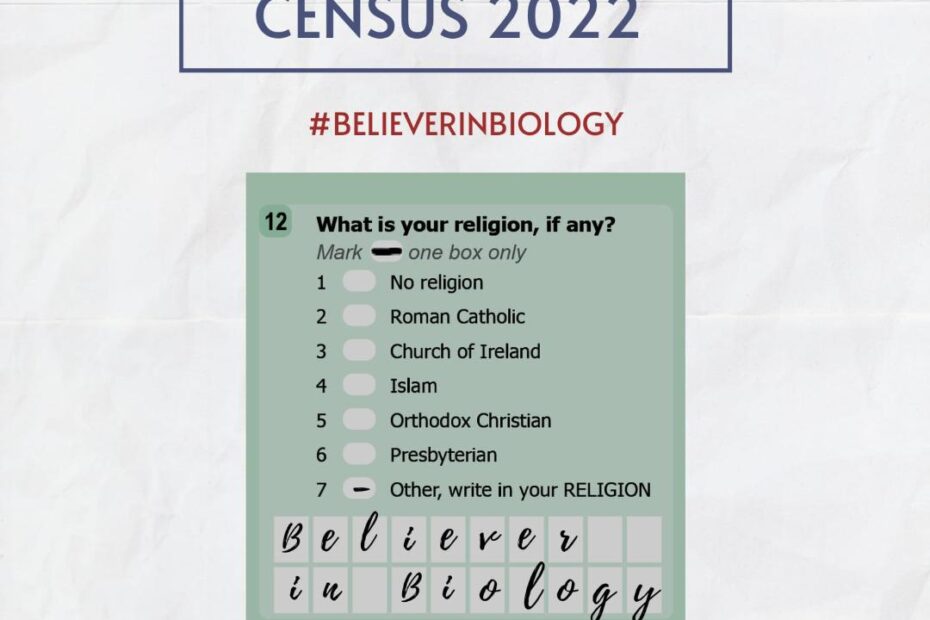 In an unprecedented departure from the historical method of counting how many males and females are in the State on the night of April 3rd, 2022, the CSO has advised trans identified people to select BOTH Male and Female on their forms. The CSO will then randomly assign their sex. This is not a viable solution because it will skew the data collected for the sex category, which is primary, after one’s name. In a joint campaign by four Irish women’s groups, we are asking those who believe that biology and gender identity should be two separate categories, to legally register their protest to the problem of gender interfering with the primacy of sex, by entering “Believer in Biology” for Question 12: “What is your religion, if any?” Just tick option 7, “Other”, and write Believer in Biology in the space provided.

The CSO has been accused of damaging the credibility of the Census by encouraging people to give false information if they feel “uncomfortable” answering the sex question with the CSO saying where sex is not clearly indicated it will be “assigned at random”.

From today (Monday 21st) women’s groups will be urging the public in the coming fortnight to add “Believer in Biology” to the religion question in Census 2022 in protest at the guidance given to those who feel uncomfortable choosing either male or female to be allowed to “signal this by ticking both boxes”.

Census forms say that any person who fails or refuses to provide information under the mandatory sections of the Census “or who knowingly provides false information may be subject to a fine of up to €44,440.”

Despite the statutory provision and penalty, the Central Statistics Office (CSO) explains in its online guidance that “.. for statistical analysis purposes all entries will be assigned a sex, where this is not clearly indicated on a Census form it will be assigned at random.” A social media and email campaign will be launched on Monday 21st March with participating groups The Countess Advocacy, Radicailín, Irish Women’s Lobby and Women’s Space Ireland.

“Everyone knows what sex they are and it’s important to maintain the integrity of data collected in the Census as required by EU legislation.  There is no good reason why gender identity ideology should be allowed disrupt the proper purpose of the Census which An Taoiseach Micheál Martin pointed out at its launch  ‘gives us the information that is vital for the planning of public services,’” said Laoise de Brún, CEO of The Countess Advocacy, a recently incorporated non-profit organisation highlighting the impact of gender identity on women and children. “For the CSO to encourage the public to provide false information on the Census is extraordinary. Why should a religious-like belief in an undefinable ‘gender identity’ be allowed to take precedence over the reality of one’s biology?” she added.

Ms de Brún went on to say “The advice relating to the sex question is a nonsensical sop to trans activism. Randomly assigning meaning to data renders it worse than useless. It is dangerous, because it interferes with the ability to formulate policy based on facts not fiction.”

“This Census debacle is an additional unintended consequence of the Gender Recognition Act 2015, which allows people to legally change their sex from that which they are born. The GRA is founded on a legal fiction that humans can change sex,” she added. “Giving in to gender identity lobbying on Census 2022 sets a dangerous precedent for allowing necessary data to be corrupted to suit particular interest groups.”