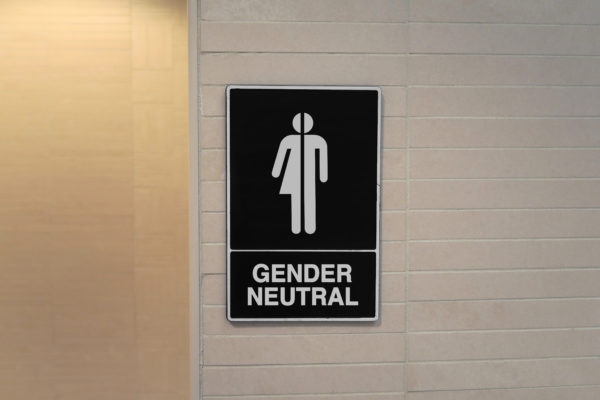 With Islam’s strict rules on modesty and segregation of the sexes, single-sex spaces matter to Muslim women. If Muslim women no longer have a private, female-only space, they will be forced to self-exclude from sports, public changing rooms and toilets, and even domestic violence shelters. This article, originally published in 5Pillars, a Muslim community media platform, is republished here with the kind permission of the author, Catherine Heseltine.

Women’s rights activist Catherine Heseltine says that the demands of the increasingly assertive trans rights lobby will come at the expense of Muslims.

On June 23 last year a group of women, including a young girl, were enjoying a day out at a spa in Los Angeles when they saw a naked man in the women’s changing area. When one of the women went to complain to staff at the spa she was told that the individual with their male genitalia exposed was a “trans woman” and that the law in California forbids discrimination on the basis of “gender identity.”

A video that the distressed woman later posted online of her confrontation with spa staff went viral leading to protests in support of her complaint and counter-protests in support of “trans rights.” It wasn’t until September 2021 that it emerged the person who had exposed his genitalia to the women in the spa was a registered sex offender with a history of indecent exposure charges.

The law in California allows any man who claims to be a woman to be legally recognised as female (and vice versa) through a process of “self-ID” – a simple declaration that they identify as the opposite sex. The SNP government in Scotland is currently proposing to introduce a similar law for “gender self-ID” after the Conservative government in London dropped its previous commitment to reform the 2004 Gender Recognition Act to align with the demands of the trans rights lobby.

Trans rights activists led by organisations such as Stonewall and Mermaids say single-sex spaces should be replaced by “trans-inclusive” spaces that allow individuals to access facilities that match their “gender identity” rather than their biological sex. But women’s groups are protesting that female single-sex spaces such as changing rooms, toilets, hospital wards, refuges, rape crisis centres, women’s prisons and also sports teams must be protected.

With Islam’s strict rules on modesty and segregation of the sexes, single-sex spaces matter to Muslims even more than most. Yet the voices of Muslim women are notably absent from the growing grassroots women’s movement to protect single-sex spaces (with the exception of a few individuals such as children’s author Onjali Rauf).

“We just need to pray” may not sound as catchy and universal as the popular slogan in support of trans-inclusive mixed-sex toilets, “we just need to pee,” but it is a very real problem for Muslim women who no longer have a private female-only space in which to perform wudu. And the implications for Muslim women who will increasingly be forced to self-exclude from sports and exercise and even domestic violence shelters are far reaching.

Perhaps nowhere are the demands of the trans rights lobby more alarming to Muslims than in schools. This came to a head in 2019 at Parkfield Primary in Birmingham. Mariam Ahmed, who has two children at the school, told the Birmingham Mail: “My little girl is four, she’s in reception and she came home asking me if it’s ok to be a boy instead of a girl.”

Teaching children that they can be “born in the wrong body” is especially dangerous in the context of a medical system that prescribes puberty blockers and cross-sex hormones to under-18s, leaving many such individuals sterile, lacking sexual function and with life-long health problems. Yet the protests of Muslim parents were easily portrayed as straightforward bigotry and old-fashioned homophobia.

This is where it’s important for Muslims to understand the difference between the LGB (lesbian, gay and bi-sexual) and the T (transgender) in the LGBT lobby. Over the course of the last decade the agenda of what used to be the gay-rights lobby has pivoted dramatically to focus on trans rights demands for gender self-ID laws, trans inclusion and the provision of “sex reassignment surgery” and medical transition services on the NHS.

British Muslims generally “live and let live” in relation to the lesbian, gay and bi-sexual community. Unfortunately no such approach is sustainable when it comes to the demands of trans rights activists. The objectives of gay rights campaigners did not take away any rights from heterosexual people, whereas trans rights activists are demanding nothing less than the complete restructuring of society on the basis of “gender identity” instead of biological sex.

Opposing the demands of the trans rights lobby is not about supporting the hate that is undoubtedly directed towards the trans-identifying minority in society. However we cannot stay silent when single-sex spaces are being taken away and gender-confused children are being put on a pathway to “medical transition.”

Many Muslims are understandably reluctant to put themselves in the line of fire by speaking out against the demands of the trans lobby. And anyway, who is going to listen to us “backward Muslims” against such a “progressive” cause? But this is where we as Muslims must join hands with the diverse and growing group of women (and male allies) who are standing up against the insanity of gender identity ideology. Many excellent campaigning organisations have sprung up and are beginning to win significant victories in the push-back against the trans lobby.

Organisations like Sex Matters, Transgender Trend and the Women’s Rights Network deserve our support in this fight. And I hope that as more Muslims join the ranks of activists fighting in this cause it will also be a golden opportunity to build important alliances and help dispel the stereotype that Muslim women are passive, oppressed and unable to speak up for our rights.