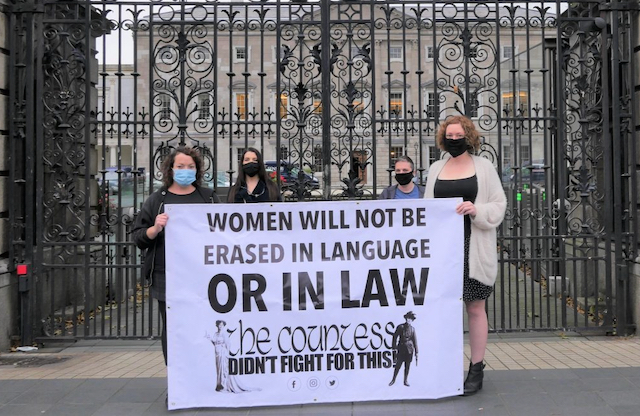 Yesterday saw the newly-formed grassroots political campaign The Countess Didn’t Fight For This protest outside the Dail, unfurling a banner stating that ‘Women Will Not Be Erased In Language Or In Law’. The banner references recent controversies involving the HSE’s use of so-called ‘inclusive’ language on its cervical screening information literature and the presence of two intact males in Limerick Women’s Prison.

“This has been a difficult few weeks for women in Ireland. Firstly our health service defended its use of the replacement of the word ‘woman’ with ‘anyone with a cervix’ in their health promotion literature. ‘Woman’ is not a dirty word – many women do not speak English as a first language or may not know what a cervix is. This move puts women in danger for the sake of using gender neutral language and was brought to light by grassroots activism. Although it has since been picked up by the National Women’s Council of Ireland (NWCI) and the Transgender Equality Network Ireland (TENI) we can now see that women are beginning to mobilise to resist the erasure of sex-specific language. We also call on the NWCI and TENI to join us in denouncing the use of the word TERF that is used as a slur to silence any debate about issues that affect women’s rights.

Secondly, we saw a dangerous male-bodied offender who has already attacked women and made threats to kill remanded into Limerick Women’s Prison. Women prisoners are amongst the most vulnerable in our society, many of them having experienced physical and sexual violence. These women must be protected and no males should be housed with them. We express our solidarity with the women in Limerick Prison and will continue to lobby for the exclusion of males from the female estate.

Finally, we saw the judicial review  taken against the NHS Tavistock and Portland Gender Identity Services in the UK by Keira Bell and Mrs A. We heard how Keira, as a young teenager ill-at-ease with her body, was encouraged along to road to transition, how she was prescribed puberty blockers and and underwent a double mastectomy. Keira wants to prevent other young women from being told that transitioning to try to be a boy will solve their fully understandable discomfort at being female. We heard evidence that little is known about the long-term effect of puberty blockers but that they are not ‘irreversible’. We know that the Tavistock runs clinics in Ireland and we know that TENI continues to encourage their use. This has to stop – we need to protect children from an ideology that tells them that their bodies are wrong and that a long, torturous medical pathway is the only way out of their mental distress. We thank Keira for her courage in standing up for her sex and are behind her all the way.

These are the reasons we are holding a banner that says women will not be erased in language or in law. We reject a culture that won’t name us, that ignores the right of the most vulnerable among us and that tells our girls that their bodies are wrong. We will continue to stand for women and girls and protect them from the effects of gender ideology as we continue our campaign for the amendment of the Gender Recognition Act.

The group which launched on Wednesday 30 September is campaigning for an amendment of the 2015 Gender Recognition Act (GRA) which it claims was enacted with insufficient public consultation. The Act allows individuals to obtain a Gender Recognition Certificate with little to no gatekeeping. The Countess Didn’t Fight For This was formed to raise awareness of how this form of ‘self-id’ impinges on the rights of women and girls. Since its launch the group has experienced a groundswell of support on social media and has been inundated with stories from concerned citizens.